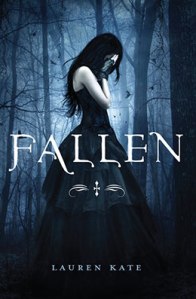 Taken from back cover:

“What if the person you were meant to be with could never be yours?

Mysterious and aloof, he captures Luce Price’s attention from the moment she sees him on her first day of Sword & Cross boarding school in Savannah. He’s the one bright spot in a place where cell phones are forbidden, the other students are screwups, and security cameras watch every move. Except Daniel wants nothing to do with Luce – he goes out of his way to make that very clear. But she can’t let it go. Drawn to him like a moth to a flame, Luce has to find out what Daniel is so desperate to keep secret… even if it kills her.”

My review is under the break!

Let’s very quickly discuss what happened in this book.

Luce Price is sent to Sword & Cross reform school in southern Georgia after being involved in the mysterious death of a former classmate. Although Luce and her parents maintain her innocence, Luce has absolutely no explanation for the presence of the “shadows” that she has seen her entire life – dark and shadowy beings that swirl and linger in the corners of her vision. Luce’s parents ultimately decide that a reform school setting is the best place for their daughter to go to receive help for these visions.

When Luce arrives at the dismal and dilapidated school, she is determined to be miserable and fight her attendance… until she meets Daniel Grigori. Daniel is a mystery to Luce – all that his file shows is a record of jaywalking offenses and that he has no known family – and for some reason, she can’t help but feel as though she knows him from somewhere. Daniel seems to want nothing to do with Luce – he rebukes her every time she attempts to strike up conversation….. but Luce just can’t let it go.

*** DISCLAIMER! THIS REVIEW CONTAINS SPOILERS! IF YOU DO NOT WANT TO BE SPOILED, STOP READING NOW!

YOU HAVE  BEEN WARNED!

Here are my main issues with the story: the plot and the main character.

The plot: Fallen is essentially about the love story between Luce and Daniel. Daniel is a fallen angel who is in love with Luce and has been in love with Luce for (presumably) hundreds of years. Here is the catch: Luce is a mortal (I think) who is constantly reborn into our world every 17 years. She lives the first part of her life as an ordinary human and eventually gets matched up with Daniel somewhere along the way, and inevitably dies after they either: speak, make physical contact (touching, hugging, etc.), kiss, or Daniel reveals something about their insane history. While this Luce-Daniel-reincarnation thing is occurring, the world finds itself in the midst of an epic war between good fallen angels and bad fallen angels (I have an issue to raise with this, I’ll touch upon it later). We have no idea what and why the angels are battling each other but we do know that the Luce-Daniel love story is somehow essential to this battle. Only this time around, Luce isn’t dead. Yet. She and Daniel have been able to speak, touch, kiss… and Daniel is even able to show Luce his true angel form… While in past lives they have never been able to get this far, Luce is still alive. For some reason, this is a game changer. Again, we have no idea why.

I feel like I need to say that this story has a lot of potential. At the surface, it sounds amazing – fallen angels, forbidden love, weird time warp loop thingies, the entire idea of a war taking place between Heaven and Hell. Unfortunately, Lauren Kate dropped the ball. She took 452 pages to tell a story that could have been nicely, completely and satisfactorily wrapped up (with room for a cliff hanger) in 252 pages. For the most part I felt like I was reading total filler. Luce whines about missing her parents and her best friend Callie (who mysteriously stops showing up in the book after 75 pages), Luce pines over Daniel, Luce feels conflicted about her feelings, Luce goes to class, etc., etc., etc. Oh, and let us not forget the hundreds of hints and clues that Lauren Kate drops along the way about what Daniel is: Luce constantly has dreams in which Daniel is an angel, Luce talks about how heavenly it would be to kiss Daniel, an evil character gives Luce a necklace with a serpent charm… and it goes on… and on… and on… until page 400 where it is finally revealed that Daniel is an angel. Damn it, we already KNEW!

(Side note: I have a serious issue with authors who assume that his/her audience is unintelligent and cannot make correct assumptions about his/her characters, despite having dropped 500 hints.)

And the whole fallen angel bit. Here is my understanding of fallen angels: a fallen angel is an angel who either directly disobeyed God and is cast out of Heaven or consciously chose to leave. In either case, these fallen angels are damned. Not good. No redemption. Lucifer is a fallen angel. Again, not good. So please explain to me how there can be good fallen angels and bad fallen angels. Either way, they are fallen… and what could they possibly have to war over? All of them have been exiled from God and Heaven…  Am I beating a dead horse? I just don’t get it. I can totally accept different versions of mythical beings (vampires, werewolves, etc.)… as long as they stay true to their particular universe. Lauren Kate chose to use Christian angels and even goes as far as to use the Bible to back these beings up… I’m giving myself a headache just trying to understand. If you can shed some insight about this… or if it is cleared up in the next book, please comment below!

The main character: I can’t decide if I don’t like Luce or if I don’t like the way that Lauren Kate wrote her. I feel like Luce is another example of an author who knows her main character extremely well and assumes that her audience has the same understanding of her. It was frustrating to read about how deeply Luce missed her best friend (Callie) for the first 70 pages only to never hear about her again… and Luce consistently acts this way. One moment she is great friends with Arriane and then we don’t see her for another 100 pages. One moment Luce is terrified of the shadows and convinced she is going insane and the next, we don’t hear her mention the shadows for five chapters. And the whole fixation on Daniel. I understand that they have a crazy intertwined history together that spans over eternity, but seriously. Luce thinks he is hot and is intrigued by his whole jaded bad boy act… but Daniel is a total dick to her for the majority of the book. He is openly rude to her, ignores her, stands her up, abandons her, shrugs off her questions and shoots down her theories as to how she knows him. And she just rolls over and takes it. Ugh.

Over all, I gave this book 2.5/5 stars. For the most part I didn’t like it – there were a couple of parts that were good… but not good enough to carry the book. It was extremely easy for me to read 20 pages, put the book down and not pick it back up for two days. I didn’t care about the characters. Luce could have gotten her hand chopped off and I wouldn’t have flinched. Mostly, I felt relief that I was inching my way towards the end. I probably will not be continuing the series… unless someone (whose opinion I trust) can convince me that Fallen was just a really crappy start to the series. I have no idea who I would recommend Fallen to.

I have seen/read a lot of great reviews about Fallen. Have you read it? What did you think?

Next up: a mini-review of something… and Hush, Hush by Becca Fitzpatrick (another angel book, I know…)

Until next time, happy reading!

Posted by acreads in Uncategorized